The Italian government have agreed to oversee a €3 million stem cell trial. Sadly, the researcher is so dodgy he could give Stanislaw Burzynski a run for his money.

Davide Vannoni (who is not a doctor, but a psychology teacher) has developed his own brand of stem cell therapy which he claims can cure fatal and incurable illnesses. The cells are not manufactured according to safety standards and there is no published evidence that the therapy could ever be effective.

Well over a hundred people, including children, are due to participate in the trial. They have conditions including Parkinson’s, motor neurone disease and coma.

Last week, Nature reported that Vannoni’s trial method is based on flawed data. Their  investigation suggests that images used in a 2010 US patent application, on which the method is said to be based, are duplicated from previous, unrelated papers.

How many red flags is that so far?

END_OF_DOCUMENT_TOKEN_TO_BE_REPLACED

Amazon have had their wrists slapped by the Advertising Standards Authority for their description of the decidedly dodgy book, Melanie’s Marvelous Measles. END_OF_DOCUMENT_TOKEN_TO_BE_REPLACED

Forget wigs, forget toupées, forget hair transplants. Forget about that new fangled vampire cure for baldness you read about in the Daily Mail.

What you need is ant semen. 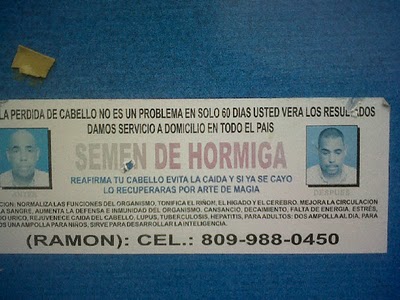 END_OF_DOCUMENT_TOKEN_TO_BE_REPLACED

Practitioners should not be making health claims for Live Blood Analysis. Not a single one. There is no evidence to support them.

The UK Committee of Advertising Practice (CAP) have published guidance on Live Blood Analysis, which advises

CAP is yet to see any evidence for the efficacy of this therapy which, without rigorous evidence to support it, should be advertised on an availability-only platform. END_OF_DOCUMENT_TOKEN_TO_BE_REPLACED