I was appalled yesterday to find the outrageous quack – ‘Dr’ Robert O Young implying on Twitter that he is able to reverse metastatic breast cancer.

This comes less than a year after Kim Tinkham tragically died of this very form of cancer after following Young’s advice.

Tinkham, who discussed her cancer on the Oprah Winfrey show, and has been written about widely online, died in December 2010 – so recently that Young still hasn’t removed links to her (now deleted) testimonial videos from his website, or from his blogpost where he claimed she had ‘reversed’ her cancer by following his pH Miracle Diet. 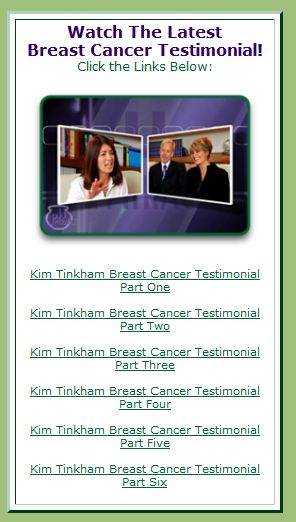 As I have said before, Young is not a medical doctor, nor does he hold a degree from an accredited institution. He has also (according to this article on the subject of Tinkham and Young) been in trouble with the law several times for illegally practising medicine.

This did not prevent him from advising Tinkham that ‘there is no such thing as cancer’, that her condition was caused by acids in the diet, and that there was no need to undergo surgery, chemotherapy or radiotherapy.

Reading more detailed coverage here and here leaves me angry and upset. It is likely that Tinkham threw away her chance of survival by having faith in Young. Furthermore, his reaction to news of the recurrence of her cancer was appalling – with him implying this was as a result of her ‘not living an alkaline lifestyle lately’ and only removing her testimonial videos when news that she was dying became public knowledge.

The fact he is continuing to imply he can ‘reverse’ metastatic breast cancer is abominable.

I believe this man is a quack of the very worst kind and I will continue to complain to and about anyone promoting his ideas – whether this is newspapers, practitioners or so called ‘Wellness Stores‘.

I would like to thank @anarchic_teapot, whose Short and Spiky blogpost on the subject of ‘Dr’ Young brought this tragedy to my attention yesterday.

This entry was posted in All and tagged Alkaline Diet, Cancer, pH Miracle, pseudoscience, Robert O Young. Bookmark the permalink.