Arthroplex: instant relief for the wallet 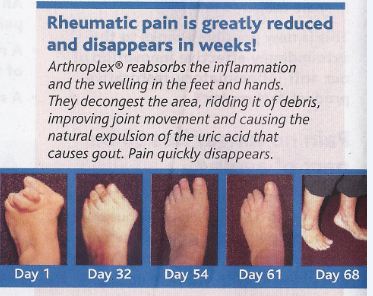 UPDATE 20/06/12 Forty-nine people reported this ad to the ASA, who upheld our complaints today. It seems some of the complaints concerned an earlier edition of the leaflet – some of the quotes on the adjudication differ from my leaflet (for example, the misspelling of ‘arthritis’ as ‘arthritus’).

You may have seen these pictures somewhere before. They featured in a recent magazine insert and have already been emailed to Ben Goldacre by an orthopaedic surgeon, who was

I have one of the inserts on my desk as I type. The product in question is ‘Doctor’s Arthroplex®‘ – an apparently revolutionary, yet unlicensed product available in capsule and gel form and claimed to be recommended by health professionals. Such inserts have recently been slotted between the pages of My Weekly, the Caravan Club magazine, Saga Magazine and Sporting Shooter.

Should you wish to say ‘no more!’ to joint pain, you are advised to order online (here), ring the Sales Team on 0845 658 5010 or send credit card details or cheque to an address in the Netherlands (Arthroplex. Eurowide Fulfilment, IBRS/CCRI, Numero 13011, Breda, 4800 VE, Netherlands).

This doesn’t necessarily mean that the product will arrive.

My 79 year old Dad fell for the ad, which was inserted into the Radio Times at the beginning of March. He paid a cheque … over £100 … for tablets and gel, and posted the cheque and the form off to the Netherlands. He received the gel soon after, but to date he has not received the tablets. The cheque was cashed more than a month ago. I’ve tried to find out who this company is on the internet, but the address doesn’t appear to exist. Can anyone shed any light on the matter? My Dad is usually a very together and alert individual, but his arthritis is getting the better of him and he said ‘he was willing to try anything’. I feel so angry on my Dad’s behalf. Oh, and the gel is absolutely useless and has NOT made a jot of difference. BEWARE EVERYONE!

Totally agree creaky joints post. I ordered 3 tubes of gel 9NEVER RECEIVED0 and 3 packs of tablets (only one received) . Theitr custmer service is a joke, virtuak=lly never reply and when they do they dont ever accept any responsibility and refuse to help. £100 down the drain. Hve complained to publication leafet was in (Saga magazine without response.Dont waste money ordering this product.

I cannot comment on whether Arthroplex is any good as I am still waiting for it’s delivery!
I ordered it on the 7th March and received confirmation on the 8th that my order was being processed and that I should receive it in 3-5 working days or in exceptional circumstances not more than 2 weeks.
I heard nothing more from them and eventually my credit card was charged for it on the 7th April.
I received their so called free gift on the 17th April from an address in Guernsey and I still await the Arthroplex -the post has already been today.
I have telephoned them twice and on both occasions was told it was on its way and that they have been waiting for supplies. The last time I phoned they informed me it had been sent from Switzerland on the 12th April!
They also charge a postage fee of £4.99 for this abysmal service.
I would NEVER re-order from this company however well it worked, that’s if I ever do find out.

The leaflet promises ‘non addictive and drug-free relief from pain’. Rather than containing drugs, the product is made up of extracts from ten plants ‘known for their therapeutic qualities’.

Of course the list of powerful pain relieving plants does not include willow or Spiraea (from which aspirin may be derived). Nor does it include the opium poppy, from which we can obtain codeine and morphine.

Here’s another rather bold claim: 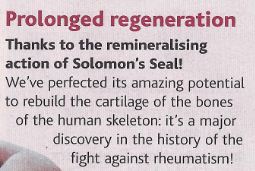 I could continue. In fact, the number of  unsubstantiated medicinal claims on this leaflet is such that to reproduce them all would more or less mean reproducing the whole thing.

According to Article 1 of Directive 2001/83/EC, a medicinal product is defined as

Any substance or combination of substances presented as having properties for treating or preventing disease in human beings;

Any substance or combination of substances which may be used in or administered to human beings either with a view to restoring, correcting or modifying physiological functions by exerting a pharmacological, immunological or metabolic action, or to making a medical diagnosis.

The full ten therapeutic (yet apparently drug free) plants listed are Arnica, Horse Chestnut, Meadowsweet, Mint, Juniper, Liquorice, Harpagophytum, Papaya, Pineapple and Solomon’s Seal. With the exception of pineapple, all these plants have recorded medicinal uses (according to this document available from the Medicines and Healthcare products Regulatory Agency website). Only six of the plants listed have recorded food uses.

Herbal medicines placed on the UK market are now required to have either a Traditional Herbal registration (THR) or a Marketing Authorisation (MA).

Correct me if I’m wrong, but I don’t think Arthroplex has either.

The website given on the leaflet is www.Arthroplex.co.uk. This redirects to the Life Natural Cures site, which was one of the first to be included on the Advertising Standards Authority’s list of non-compliant online advertisers.

Since the company has now disappeared from that list, I can only assume that they removed the specific claims in question. Yet the site remains defiantly non-compliant, making all sorts of unsubstantiated medicinal claims about all sorts of unauthorised products. Such products include ‘natural support for diabetes sufferers‘, an anti-ageing silkworm enzyme said to stop pain, a product based on Nobel Prize winning science which can turn back your body clock by thirty years and a whole range of products aimed improving your sexual health and libido.

A quick search on the ASA website indicates a long history of non-compliance. I have found details of four upheld complaints relating to advertising by Life Healthcare (also known as Life Natural Cures) and three listed database cases.

As I have previously mentioned this company on my blog, I have already received emails from two customers who paid Life Natural Cures for goods which were never received. To be clear – these were private emails, in addition to the forum quotes shown above. If there are any more people reading this still awaiting goods, I would advise you to contact your local Trading Standards office or Citizens Advice Bureau. You may also wish to consider contacting the Medicines and Healthcare products Regulatory Agency and the Advertising Standards Authority.

And please feel free to get in touch with me too. I would be very interested to hear of your experience and will try to help in any way I can.

I have also scanned the whole leaflet should anybody wish to view it in full:

81 responses to “Arthroplex: instant relief for the wallet”